When you guest blog

Have you ever had the opportunity to guest blog for another writer?  If so, you know it's a win-win situation.  Guest bloggers may help enlighten other writers (with the extra bonus of promoting their work) while the host's blog may be visited by more people.

Here are some tips to keep in mind when you are invited to write a post:

1.  Understand what the host requires in terms of subject matter.  Stay focused on that topic.  If you have another subject you'd like to write about other than the one the host has suggested, check with her first to see if she is open to your new idea.

2.  Know the expected word count.  Try to keep within the expected range.  The host is counting on you to provide what she has specified.

3.  Send the post in a timely manner.  For my blog, I like to receive the guest post at least five days in advance.  Sometimes, guest blogs need revision, so be polite and give the host time to edit your work.

4.  Review your guest blog several times after you've written it and before you send it.  Occasionally, I will receive a blog that looks like the guest writer simply jotted the first thing that came to mind and sent it for me to publish.  It's exasperating to receive a guest blog that has grammatical mistakes and lacks clarity.

Guest blogs score big with audiences when they are educational and inspirational.  That's easy to accomplish when you're passionate about your writing.  Throw in a well-written, nicely edited piece and your host will take notice.  If you impress her with your writing, she's likely to invite you to guest blog for her again.
Posted by Randi at Saturday, February 23, 2013 No comments:

Sharing the Love of Reading with Children 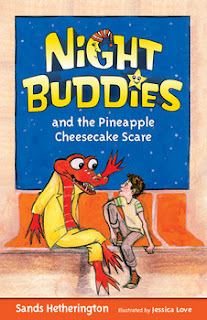 
I immersed my son John in stories from the time he could understand speech.  Bedtime stories were an absolute essential to us, like air and food.  We may not have missed five nights in ten years, even on trips.  And on trips we would listen to books on tape for days in the car.  I read him everything from Aesop to Tolkien to Dahl (Harry Potter hadn't come along yet).  By the time John was twelve, we had gone through most of Dickens and Victor Hugo.  So he was always immersed in stories, and man did it ever work!  He got an M.A. at Edinburgh University with Firsts in German and Russian, reads two or three books a week, and still watches Hobbit movies. 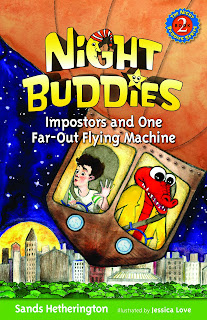 If you're determined to get kids hooked, there's something you can do in addition to bedtime stories: Get them involved!  Let me illustrate by telling how my Night Buddies stories got started.  The series features John Degraffenreidt and Crosley.  John is a young kid pretty much like my own and Crosley is a bright-red crocodile.  He sneaks John out of the house for adventures on nights when John isn't ready to go to sleep.
This is how the idea for stories came about:  My son John had invented Crosley from whole cloth.  One night when I was done reading, I may have suggested that he make up a night companion to go off to sleep with.  Or maybe I didn't suggest it.  He could have taken the initiative himself.  But in any case, in a day or two, there was Crosley, red color, goofy name and all.
So at bedtime we started batting around the Crosley stuff.  I encouraged John to make up episodes.  I mostly listened.  If he did come up with something, I told him how super it was and asked him when could I hear the next installment.  I think he was still six.  He got really facile at it, and I got the larcenous idea of putting the two of them in a book.
In my books I had to explain why Crosley was red, of course.  (He was red because he was allergic to water.)  And the rest fell into place fairly easily.  Crosley first began as a lights-out buddy.  But from there, he became part of Night Buddies Amalgamated, whose members sneak kids out on adventures when the kids aren't ready for bed yet.  That's the story formula, and John was hooked, and I was hooked.
You may need some luck with the "getting involved" part.  But anybody can do bedtime stories, and I haven't met a child yet who didn't take to bedtime stories.  You just have to do it and do it every night.  If you do, the child will enjoy it and look forward to it and quickly know literature as a pleasure.  Then, when he learns to read, he will want to read.  So get him in on the process if you can. It's as simple as that. 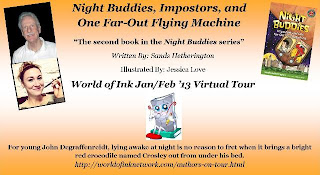 What does it take to be kind?  Here’s an example:

Last fall, my husband ordered parts for our broken water heater.  However, a neighbor that lived several blocks away received the packages of parts by mistake.  She tracked us down and called to tell us she had our boxes.  I don’t know of many people who would have gone to the trouble or taken the time to hunt us down.  She told me she’d leave our packages on her front porch.  So when I came to pick up them up, I left her a basket of flowers with a thank you note.

Several months later on Christmas Eve, the door bell rang.  A woman introduced herself as a neighbor and handed me a beautiful basket full of treats.  I couldn’t place this neighbor, so when I asked, she reminded me that she was the lady who had accidently received our packages. (We had only talked on the phone, but had never met personally).  My heart melted.  I invited her in as we chatted and she told me that she thought our house looked so pretty for the holidays.  That too, brightened my evening.

Just a simple gesture and a sincere compliment made my day.   And so what’s the point?  (And what does this have to do with writing?)

Make it a point to reach out to fellow writers.  Find opportunities to be helpful and to be kind.  For instance, you could encourage writers if they are facing writer’s block or help them in reviewing their work.  You could compliment writers if they have written a story that you like or if they have posted a great blog.  You could congratulate writers when they win a writing assignment or contest.  On the other hand, if others have helped you with your writing, you could send them a thank card or buy them an inexpensive book on writing.

Kindness is a little about you and a lot about others.  Simple acts of kindness are greatly appreciated.  It costs very little to be kind and people will remember you for it.  I can guarantee that when you show kindness, you will be rewarded in unexpected beautiful ways.