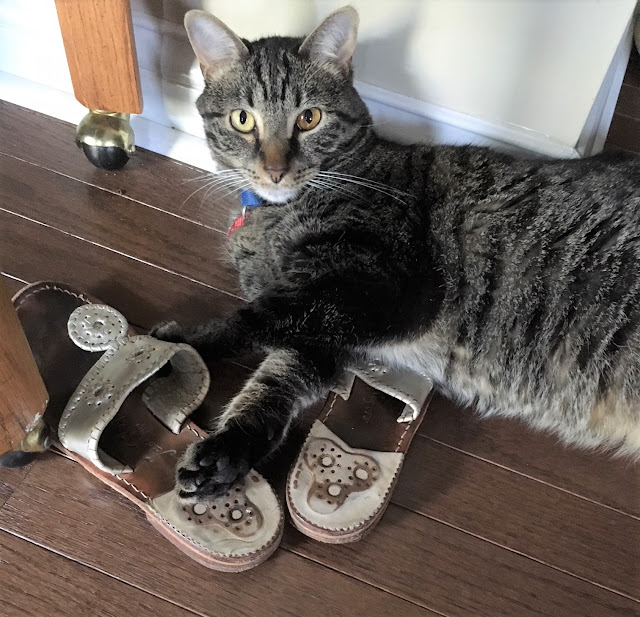 I'M AN INDOOR CAT AND I DON'T BELONG OUTSIDE
I never knew cats could bring me to tears.

Had I been blessed with foresight, I may have never have adopted one.  But since my daughter begged for a pet, we found a cat at the Lexington Humane Society, unaware of what the future would bring.

Ollie was a smart cat.  He could obey commands like sit, stay, and come here.  He did however, have a peculiar habit.  Ollie insisted on scooping kibbles from his dish to the tray before eating them, which was quirky as well as noisy.  Sadly, Ollie only lived to be eight-years old.  He hid his illness well as most cats do.  When his symptoms began to show, it was too late to do much for him.  We tried to enrich his diet and to give him sub-cutaneous fluids, but nothing seemed to work.  Ollie was wasting away—not eating, not able to clean himself, not being able to make it to the litter box.  It was agonizing to see him struggle so much.

Then after bringing him to veterinarian to administer fluids (we were not that successful at home), I learned that his condition would only worsen.  He could develop seizures.  So, it was time to make the painful decision to put Ollie to sleep.  I sat sat in the waiting room sobbing, my tears flowing like a fountain.  When the vet returned, I received Ollie's body wrapped in a clean white cloth.  I swore I'd never go through this heartbreak again.

After three months, I missed having a cat in the house and consequently, I went back at the animal shelter.  Companionship outweighed the risk of heartache.  And the minute I saw Ozzie's eyes (one is amber and the other is green), I knew this was the cat for me.

Ozzie is a good ol' boy.  The sweetest, loving cat.  A talker.  Ask him anything and he'll speak right up.  You want food?  He answers with a meh, meaning yes.  You want to go upstairs?  Meh.  You want to watch bird Youtube videos?  Meh.  Granted, his vocabulary is limited, but he'll speak up when spoken to.

As you can expect, he's as curious as any other cat.  If a cabinet is open, he'll climb inside.  If dinner is on the table, he'll hop up for a sniff.  If stray cat comes to our deck, he'll go to the door to have a look.

Ozzie is not only curious, he's daring.  He'll slip outside if we have not completed closed a door.  He has darted out a few times, but we were able to catch him quickly.  But one time, he snuck out and the timing couldn't have been worse.  He took off to the great outdoors on the day we needed to pick friends up at the airport and go out for dinner.
I was a nervous wreck. I envisioned him being run over by a car or getting into a fight with a stray cat.  I imagined him never finding his way back home.  My husband Jim and I had a few minutes to search for him in the neighborhood, but we didn't have any luck.  Our friend's flight would be arriving and we had to get going.  For my peace of mind, we kept the garage door up and the basement door open just in case he'd return.

During dinner, I had a hard time concentrating.  I fought back tears worrying about my sweet boy.  Daylight was fading.  Ozzie is an indoor cat.  He didn't have the skills to take care of himself in the wild.  Ever since we adopted him, we had always provided food and shelter.

From the time we went to the airport, had dinner, and drove back home, Ozzie had been missing for four hours.  But when we pulled back into the garage, I caught a glimpse of something furry scurrying from the left side to the right side of the garage.  Ozzie!  Either he had been hiding in the garage the entire time, or he was close by and slipped inside the minute we pulled into the garage.

Jim and I try to keep close tabs on Ozzie.  But no matter how careful we are, Ozzie could escape again, so there had to be a plan in place.  But we didn't know what we could do.  Then one evening, Jim and I took a walk in the neighborhood and discovered a lost puppy.  The dog wore tags that had his name, an address and contact number.  After making a phone call, we were able to unite him with his owner in less than ten minutes.

And that sparked the idea.  Though Ozzie is chipped and wears vaccination tags, he needed another tag with his name, an address, and a phone number.  It was easy enough to find tags online that could be personalized.  I found a cute one that had room for a name and a phone number (which we put on the front) and space for four lines of text on the back.  Neighbors would be able to learn his home address and give us a call.  They would see he's an indoor cat—and that he doesn't belong outside.

We'd like to think that Ozzie is happy.  He could however, be bored being in inside.  To that I would say, "Sorry, my sweet boy.  Being inside keeps you safe."  But he wasn't born with good sense and one certainly can't reason with him.  When a door is ajar, it's an open invitation.  He just can't help himself.  Off he goes.  There are so many sights and smells to experience.  He'll take off regardless how it makes me feel.  I know, I know, he's a cat.  He's certainly not considering my feelings.  Still, I wish he had an inkling that his curiosity has the power to bring me to tears.

Hi! I'm Randi, an author, an editorial consultant, the editor of Kid's Imagination Train e-zine, and a member of SCBWI. I love my husband and daughter, our cat Ozzie, Putt-Putt the stray cat we care for, EVERYTHING French and doing ballet. Follow me for a look inside a writer's world.