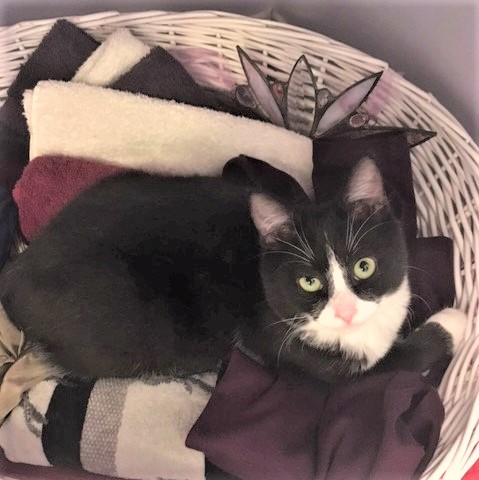 LOSING A PET
I grieve for my pet.
On a frosty November night, our beloved cat Ozzie ran away.  The basement door was ajar and he slipped outside.  It's been months since he's disappeared.
Ozzie was always intrigued with the outside world.  He'd attempt to sneak out whenever we opened the deck or patio doors.  He'd push against the screen door trying to tear through it.
A few months before his departure, he'd hop up to a table and stare longingly through a window at the backyard.  I thought he might be watching for opossums, raccoons, or stray cats.  Perhaps, he was pining to be outside and planning his escape.
Two years ago, he got outside through the basement door that led into the garage.  When we discovered he was missing, we searched the garage, our yard, and the neighborhood.  Ozzie reappeared in the garage about four hours later.
Since that day, I bought a tag for his collar which was engraved:  Ozzie.  I'm an indoor cat.  I don't belong outside.  Please call my mom.
But the tag didn't help.  Ozzie is still missing.
Here's what I think could have happened:
I believe if Ozzie wanted to, he could have come back the night he escaped.  The door had been open for several hours.  It was cold outside and the terrain beyond our property was unfamiliar.  Occasionally, I had taken him out with a vest and leash to enjoy the backyard.  I think he would have recognized the difference in the smells of our yard and the area beyond.
A week after Ozzie's escape, my husband and I went to the Humane Society hoping to find him, but no one had brought Ozzie to the shelter.  While we were there, we played with some kittens that were up for adoption.  One of the little bitty cats let me hold her in my lap without squirming.  What were the chances on that day we'd find a kitten with the same name as our daughter?
We adopted Abby, but renamed her Lizzie (a double z in honor of Ozzie.)  Several days later when I took Lizzie to our veterinarian, I told him about Ozzie's disappearance.  Dr. Vice had taken care of Ozzie for seven years.  As he gave Lizzie a rabies shot, he said that no other cat will replace Ozzie.  He said, "Now you have Lizzie and she will have her own story."
I miss Ozzie.  I may never get over losing him.  He was my bud.  I hear stories about pets finding their way back home months after they've disappeared.  So, Ozzie may return and have a baby sister.  But for now, my life is different and I have to deal with the devastating loss and the crushing heartbreak.
I stroke Lizzie's little face and rub her furry belly and ask, "Lizzie, do you know where Ozzie can be?"  She looks at me tenderly, as if pondering his whereabouts, as if she knows.  Then I ask her one more question:  "Lizzie, with what will your story be?"
Ozzie me manque
Posted by Randi at Tuesday, February 01, 2022 No comments:
Newer Posts Older Posts Home
Subscribe to: Posts (Atom)