THE KING AND THE QUEEN RULE THE CASTLE
I never imagined I'd be taking care of two cats.

That wasn't the plan.  Though I believed Ozzie, our adopted tabby, would want a brother or a sister, my husband Jim convinced me that Oz would never want to share his domain with another cat.  We were a one-cat family and Ozzie was king of the castle.

And then Ozzie abandoned the castle.  The basement door was accidently left open and just like that, he disappeared.

From the day he was adopted, Ozzie had always been an indoor cat.  He didn't possess the skills to survive outside.  I was devastated and heartbroken.  I imagined the worse—it was November and the temperatures were plunging.  How would he stay warm?  How would he find food?  How would he make his way back home?

After ten days, I was beginning to lose hope that he'd return.  Nevertheless, my husband and I drove to the Humane Society hoping someone had found Ozzie and dropped him off.  But Ozzie was not in the room for lost pets.

On the way home, we stopped by PetSmart.  I wanted to see if a kitty would brighten my mood.  And then I spotted a black and white five-month-old kitten named Abby.  I couldn't resist.  She had the same name as our daughter.  We adopted her on the spot and changed her name to Lizzie (double z's in honor of Ozzie). 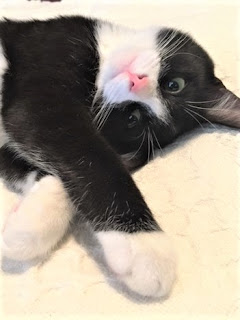 It was an impetuous move.  I didn't know if I could love Lizzie as much as Ozzie.  Seven weeks later at the end of January, I got a call from a neighbor who saw a picture on Facebook of a cat she thought looked like Ozzie.  When I took a look, I wasn't sure if it was our pet. The picture was fuzzy.  Still, it was worth looking into.  My husband located the address of the person who had posted the picture.  To our amazement, the address was only a half a mile away.  We dropped everything and raced to the townhouse.  We were ushered to the basement and there was Ozzie, all skin and bones, too weak to meow, to limp to hold his head up.

When we brought him home, our plan was to take him to the vet to have him checked out, feed him so he could put on weight, let him rest, and keep his curious sister away.  Which she obliged.  She must have sensed he was in bad shape.

In two weeks, he gradually got stronger and Lizzie was over with being patient.  She had to check out her new playmate.  Which for Ozzie, was something he hadn't anticipated.  He had overcome the ordeal of living outside in the freezing snow and ice, trying to forage to find food, and now he had to contend with an energetic kitten.  Let me tell you he wasn't in the mood to be pounced on by Lizzie.  This was new to him.  He had never played before and having no claws, he had no way to defend himself.

Gradually, and upon Lizzie's insistence, he got the hang of rough-housing with her.  As he put on more weight, he grew bigger than Liz and he could wrestle with her, pin her down and nip at her paws.  From the sound of her squeals, you'd think she was in pain and she's had enough, but she always came back for more. 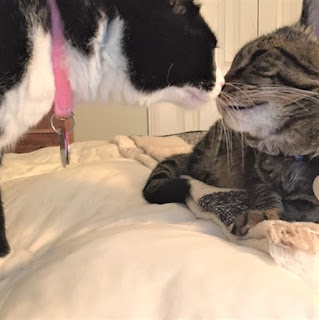 On top of Lizzie's playfulness, Ozzie has to put up with her piggish eating habits.  If I'm not present to guard Ozzie's food, she would gobble her kibbles and then shove him out of the way to eat from his bowl.  Being a gentleman, he would simply sit and watch her chow down.

During the day, Lizzie climbs into my lap as I write and Ozzie hangs out behind my computer.  At night, Lizzie gets more wound up and nips at my toes and calves.  Ozzie snoozes or watches his wild sister.   They may wrestle a bit, and Ozzie may even instigate it.  And when they settle down, I give them both chin and belly rubs.  I gaze at one and then the other, at one who survived the unimaginable and at one who had been called Abby.  Who would have thought there'd be two cats in the Mrvos household?  Life in the castle changed.  The king lives peacefully (for the most part) with the queen.

Things come and go and come back.  Things grow and grow and what's left is love, an abundance of love.