Thank you for reading and supporting Children's Writer's World blog as well as
Kid's Imagination Train.  Please leave a comment if you have any writers' topics
you'd like to have discussed on future blogs. 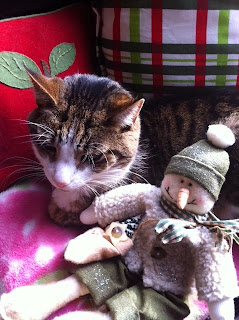 Ollie, our rescue cat of six years, is in the mood for a holiday nap.  He usually joins me as I write, lounging in my lap or sitting in front of the computer screen.

Ollie and I wish you all a wonderful new year.  Happy writing!

Have you ever wanted to write a nonfiction piece, but decided against it because you'd have to get an expert review?  Don't let that stop you.  Finding an expert is easy.

Go online and do a Google search by typing:  research and the name of your topic.       For instance, if you wanted to find an expert on the topic of leeches, type:  "research and leeches."  Often times, you'll find a link that will take you directly to a researcher's website.  You can also check out college directories and take a look at professors' studies.  In both cases, you will usually have access to a phone number or an email so that you may contact them.

Before you contact an expert however, be sure to read his/her research first.  Then, send an email in which you mention the topic of your article and where the piece will be submitted.  Then politely ask for the expert to review the article.  Add that you will give credit for his/her expertise.  Even if the expert may not be available to provide you with a review, many times they may recommend someone else who is equally qualified.
Always aim to get an expert review when you write nonfiction.  Here's why:

* Experts assure accuracy.  They can spot mistakes or misrepresented facts.
* Experts can answer questions you may have about their research.
* Experts may explain advanced concepts in simple terms, so that you can help kids to      understand more easily.
* Experts may even lend fabulous quotes or anecdotes that you can add to your piece.

Editors will strongly consider an article reviewed by an expert over one that hasn't.
They know that experts lend credibility to your work.  So, don't let the fear of finding an expert hold you back from writing nonfiction.  From my experience, you would be surprised how many experts are more than willing to lend a helping hand.

Last winter, I registered for a MG/YA webinar taught by literary agent Mary Kole.  Having already taken a picture book webinar taught by Mary and being curious about writing for an older audience, I thought this online class would be perfect.  And it was.  After taking the class, I became interested in writing for this genre.

Though Mary offered a 500-word critique as a part of the webinar, I could not decide whether to submit.  After all, I had only written picture books.  But as time drew closer to the deadline, I realized it was an opportunity to have my work evaluated by a well-respected agent.  So, I wrote the first two chapters of a story which was based on actual events that took place in my life many years ago.

Weeks later when I received the critique, Mary pointed out that she liked the voice and the images.  This inspired me and spurred me on, but still I did not know what I was getting into.  I’m a picture book writer, you know, books that are well under 1000 words. Middle grade novels were at the very least 15,000 words!

And that was scary.  So, I started by planning the story in my head, daydreaming about my main character and her unusual quest.  As the plot became more apparent to me, I made notes on index cards to flesh out each chapter and then arranged the cards in the sequence in which to tell the story.  When the chief details and scenes were finished, I had close to 30 cards. I figured I could write 500-word chapters.  Then I did the math:  500 words x 30 cards = 15,000 words.  Now this goal was achievable.

When I began to write the chapters, more characters popped up (more than I had realized were necessary to the story).  Those characters took control and showed me how they would handle a situation (often much different than I had imagined).  Hence, the plot became layered with subplots and twists.  Thus, more note cards!  In the end, my novel weighed in at a hefty 43,000 words—which still blows me away!

So, even if you’re a picture book writer, never let word count scare you about writing a children's novel.  If you’re curious about MG or YA, take a class, a webinar, and read books to get a feel for writing for an older audience.  Armed with knowledge, you’ll have the basic tools to get you going.  Keep in mind that middle grade can run as little as 15,000 words, but tends to run 30,000 – 60,000 on the average.  So, use note cards to give you the confidence to help plan your story.  Before long, you will find that the unthinkable journey of writing 15,000 words or more will become an achievable reality.

One morning, I sat in front of the computer with the goal of editing a nonfiction piece.  All it needed was minor revision.  But, my brain was not engaged.  I could feel the onset of a migraine.  Migraines are known to produce foggy thinking, and this was living proof. What should have been an easy project became an unfinished project.  This revision was going nowhere.  Luckily, I realized that instead of continuing and getting more frustrated, I needed to take migraine medicine and move away from the computer.  Far away.  It was time to take a walk.  Clear the muddiness that had settled in my brain.

The day was chilly—jacket weather, but sunny and inviting.  Wet oak leaves matted the sidewalk in clumps. Boxwood shrubs released their earthy scent and whipped it into the breeze. Squirrels chased up trees.  A stray cat scurried into the street and stole away in a whisper.  Then, moments of pure quiet.  No thoughts of writing.

Twenty minutes later, I stepped to our front walkway feeling relaxed and more refreshed. When I returned to the computer, I opened my email.  There waiting was an offer to teach a class on writing for children's magazines at the Carnegie Center for Literacy and Learning.  What an honor. Sweet!

Now glowing because of the email, I thought about editing that nonfiction piece.  Naw, I opted to plunge to work on a fictional piece.  And good thing.  My muse was present and pushing me like never before, guiding me with word choice and sentence structure along the path of creativity.  I worked at a dizzying speed, trying to keep up with all of her suggestions.  Then, I returned to the nonfiction piece.  And that too, became easier to edit.  My muse did not let me down and she remained to steer me through the entire editing process.

So what was it that led to such a successful writing day?  The exciting email was a nice touch (so was getting rid of a headache), but I think it was because of being outside. Moving away from the computer and getting in touch with nature cleared the cobwebs from my mind.  It helped set the stage for a perfect writing day.