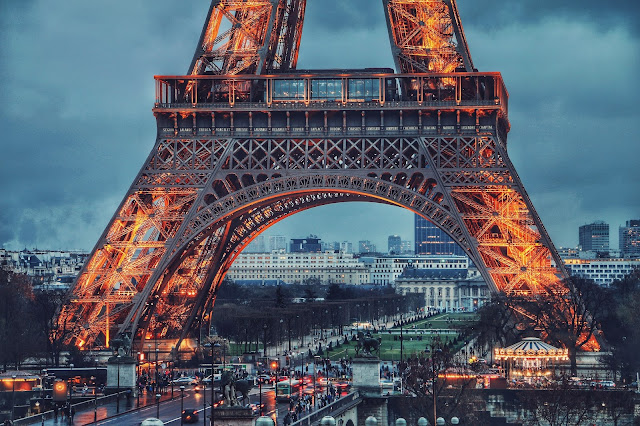 My passion for French began decades ago when I was in high school.  Back then, students were required to take a foreign language.  We had three choices:  Spanish, French, and Latin.  Since I did poorly with Spanish in elementary school and felt Latin would not be useful for me, I decided to take French.  La langue était marveilleuse (the language was marvelous).  I would have liked to have studied more French in college, but my class load was packed.  Learning French would have to wait.

Then many years later, my passion for the language was rekindled.  When my husband and I decided to travel to France as a graduation gift for our daughter, I enrolled in a French class to become better acquainted with the language.

I discovered that words have different meanings depending upon which definite article is used.  For example:  Le vase is the vase.  La vase is wet sand.  Le livre is the book and la livre is a pound.

Learning vocabulary can be challenging.  Travailler does not mean to travel.  The correct word is voyager.  Coin means corner, not pieces of money.  And coin-coin is quack-quack, the sound a duck makes.  Even more confusing is the word librairie, where one goes to buy a book, not borrow one.  The word bibliothèque is a library where you can check out books.

On top of that, there are homophones which are words that sound the same.  Glass (verre), green (vert), earthworm (ver), toward (vers) and a gray-green color (vair) are all pronounced "vare."  You have to listen to the context of the sentence to understand which is word is being used.

Despite the complexities, I gradually learned adjectives, moved on to verbs and figured out how to put simple sentences together.  I felt fairly confident we could get by in Paris.  I knew how to say bonjour (good day), merci (thank you), s'il vous plaît (please), je voudrais (I would like), au revoir (good bye) and the ever so important phrase où sont les toilettes (where are the toilets?)

And yet when we arrived in France, I could not communicate that well.  I could order wine with dinner, but not a muffin for breakfast.  That's crazy, huh (C'est fou, n'est pas?) The word muffin is spelled as it is in English, but in French it is pronounced "mew-fah."  The waitress didn't understand me, so I ordered a croissant instead.

It's been seven years since my first adult class.  I can read fairly well and understand conversation if it's spoken slowly.  But speaking effortlessly stills eludes me.  Living in France would be helpful, and though that is a dream, it will have to wait.  In the meantime, I take two French classes a week: a grammar class and a reading class.  I also listen to podcasts in French and study grammar in supplemental workbooks.

So why I would put myself through learning a difficult language?  The answer's easy:  I have an overwhelming love for French.  It's good for my brain and it's beautiful to speak.  I will keep taking classes to learn grammar, vocabulary, and expressions.  The ultimate goal is to speak more fluently and to be understood.  Because I plan on returning to Paris.  And when I return—I'll be having a muffin for breakfast.