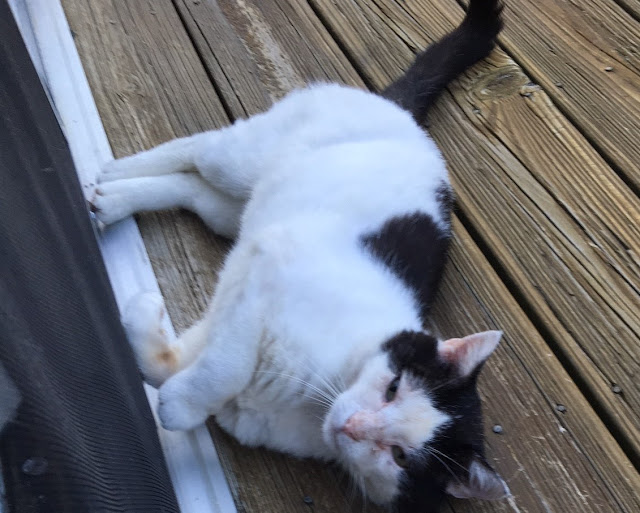 LOVING NOT ONE, BUT TWO STRAYS

I'm not embarrassed to say that I love a scruffy cat called Putty.
Putty is the cat that I took care of for over seven years.  Ever since a tom cat attacked him on our deck, I've seen very little of my sweet stray.

When Putty first came to our door begging for food, he was shy and he didn't hang around for long.  Over time, he became accustomed to me.  He'd follow me on the deck when I fed the birds or in the garden when I weeded.  He'd come to patio after I'd drive into the garage and greet me with a gravelly meow.  Putty would even let me pat his head.  He learned his name and would trot up to me when I called him.

Putty had it made.  This cat ate canned cat food and tuna. He was spoiled rotten and I loved spoiling him.

But after the cat fight, he's only returned one or two times.  I've seen him in the neighborhood when I take a walk, and I'll call him, but he doesn't come to me.  He only stops and stares.  I wonder where he hangs out.  I wonder if someone else feeds him.  I wonder if he has forgotten me.
Then this spring, another stray cat came to our deck.  She's beautiful and tiny and I call her Kitty.  You can see from this photo that her left ear has been clipped.  This is called ear-tipping and it is the universal sign that a feral cat has been sterilized.

Kitty is like a miniature version of Putty, though instead of having black spots on a white coat like Putty, she has striped spots.  Like Putty, she has green eyes and a pink nose.  She has the identical facial pattern as Putty, which looks like she's wearing a cap that comes to a point on her forehead, curves around her eyes, and extends down to the upper cheeks.  She looks like she could be his daughter.
One night, I heard an angry growling sound coming from   outside.  It could only mean trouble.  Another stray, a huge   Russian Blue cat, was fighting with Kitty.  It was like a rerun of   Putty's skirmish on our deck.  I banged on the kitchen window but that did not stop him.  I opened the door and yelled at him, and then both cats ran away.  Luckily, the attack didn't harm Kitty or scare her from coming back.
Kitty makes herself at home on our deck much like Putty had done, stretching out on her back with paws facing the sky, curling on a chair, or resting under the picnic table.  But no matter how comfortable she is lounging on the deck, I have not gained her confidence.  She stares at me through the kitchen door wanting to be fed.  Then when I fill her bowl, she skitters to the opposite side of the deck.  She comes to eat only after I close the door.  In time, this may change.

Part of me feels that Putty's departure has made room for a cat that needs more attention than he does.  I try to wrap my head around the fact that Kitty is the cat that I'm supposed to be caring for, not Putty.  In a way that makes me feel better.  That somehow this is how things are meant to be.  But it doesn't mean I like it.  It's just how things are for now.

Though I enjoy having Kitty around, I am ever hopeful that Putty will return*.  Maybe during the winter months I'll be putting out tuna for him.  And when the weather gets colder, I'll be taking care of not one, but two strays, little Kitty and a cat that I call Putty.
À la prochaine!

*Putty stopped by on Sept.19th!!! Guess what he had for dinner?