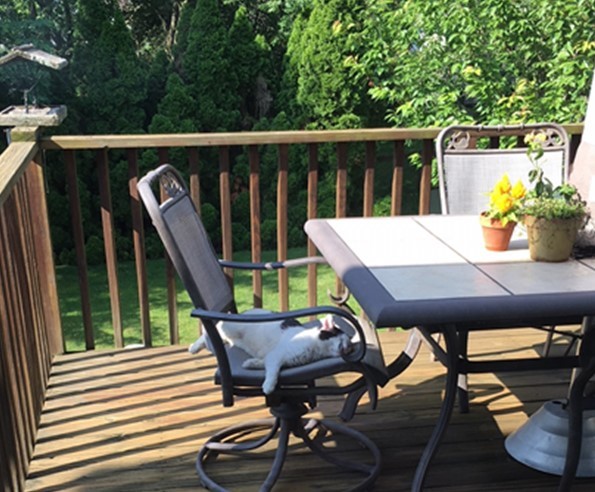 DOPEY AND SLEEPY, BUT NOT HAPPY OR LITERALLY LETTING THE CAT OUT OF THE BAG

I should have never tried to drug drugged a stray cat.

Putt-Putt is the black and white stray cat that we feed and care for.

Our family thought it would be a good idea to take him in for a check-up with our veterinarian.

The big question was, how do you catch a cat that doesn't want to be caught?  A friend suggested that I give him a sedative.  I thought that was brilliant.

I explained the situation to my vet and he approved a mild sedative.  The following morning, I crushed only a quarter of the tablet and put it in his food.

Within five minutes his eyes were glassy.  I gently slipped the cloth laundry bag over him and pulled the drawstring.

Well, that was easy.  Putt-Putt only had to sleep for a few hours until his appointment.

And then, Putt-Putt must have realized something was not quite right.  No ground beneath his paws. No blue skies overhead.  He went berserk.  Lord have mercy, this cat was on a mission to escape faster than Harry Houdini.

I called my husband's cell.

My loving and devoted husband knew ahead of time what I had hoped to accomplish.  He scrambled out of bed and dashed into the garage for the carrier and began to climb the steps to the deck where I had one unhappy supposedly-drugged cat.

He arrived just in time to see Putt-Putt slice the bag and tear it to shreds with his claws.

No problem, he'll probably calm down and sleep it off.  I mean, he's doped up.  Right?

Putt-Putt took off like a bcat out of hell.

I hadn't counted on him getting agitated and scared.  I expected him to take one long cat nap.

Then an enormous amount of guilt swallowed me up.  Here was this sedated cat that I love disappearing to who knows where and it was all because of me.

I had visions of my beloved stray being hit by a car.  Chased by a dog.  Carried away by a hawk.
If you've ever seen the movie The Proposal with Kevin the dog (replace Kevin with Putty) you'll know what I mean.

I searched the neighborhood and called for him throughout the morning meanwhile swearing I would never ever try this stunt again.

By early afternoon, Putt-Putt returned to sleep on our deck. Unharmed.  When he awoke, I had a big dish of sedative-free cat food waiting for him.

As for getting him in to the vet and having his health checked out, I'm not sure that's going to happen.

All ideas sound good theoretically at first.  The same is true with writing or any other task.  Some ideas work, others don't.  You've got to try and see.

But if the idea sounds questionable from the very start and it includes a cat, it's probably best to scratch it.

Listen to Randi Lynn read Dopey and Sleep, but not Happy... 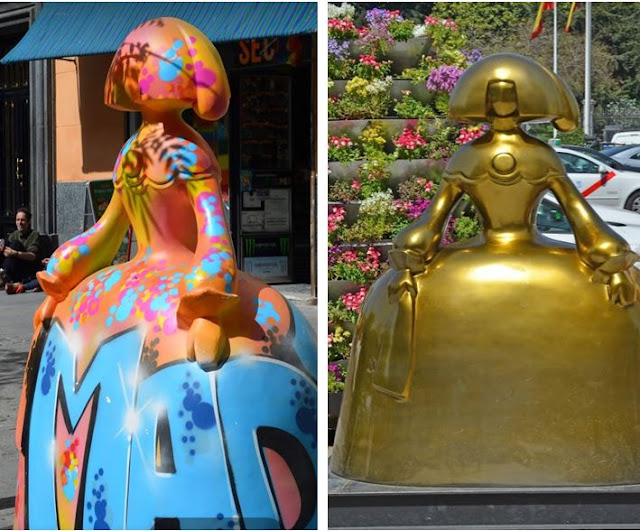 AND THEN CAME VELAZQUEZ


I'm a bit of a French Impressionist art snob.  Nothing can compare to Monet and Renoir, and my favorite, Van Gogh. Then came Velázquez.

I didn't mean to fall in love with his work.  His work came to me.

When my husband and I arrived in Spain last April, we dropped off our luggage and began exploring the  neighborhoods of Madrid.  As we wandered around, we discovered vibrant statues placed all over the city in honor of Diego de Velázquez.

Velázquez (1599-1660) was the royal painter in the court of Philip II in Madrid.  He sought to capture the reality of things and people rather than follow the classical standard of ideal beauty.

The Maids of Honour by Velázquez were placed in streets, squares and recognisable settings. According to Meninas Madrid Gallery - Turismo Madrid  the statues "express the vision of the city of their creators, diverse personalities from the world of art, film, sport and celebrities in general.


The initiative reinterprets each of the Infant Margarita’s maids of honour in the famous painting Las Meninas (The Ladies in Waiting) by Velázquez in the form of a sculpture. The aim is to portray the plural identity of the Spanish capital through a street museum made up of more than 80 Maids of Honour.  Two metres high, each one will carry an individual message and, together, they will help to reveal Velázquez’s 'infinite message.'”

The painting of Las Meninas is enormous—10.5 ft x 9 ft.  Imagine the undertaking that fell on Velázquez's shoulders:  deciding the viewpoint, the colors, the composition, how to add symbolism and mystery, and even where and how to insert himself in the painting!

So these little maids got me thinking about writing.  And how writing is like art. 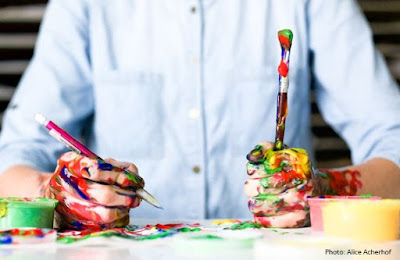 We wrap our words in symbolism and mystery.   We consider viewpoint.  We color our work with alliteration, assonance, simile and metaphor.  We observe the world around us.  We notice details.

Our styles are as different as the canvases of Monet, Renoir, Van Gogh, and Velázquez.

Our voices are unique.

And sometimes whether we're in the throes of writely bliss or in the despair of writer's block, or on vacation, or doing whatever it is we do daily, the universe brings us something we don't expect.  Something significant is put in right in our path...

to notice, observe, admire, and inspire.