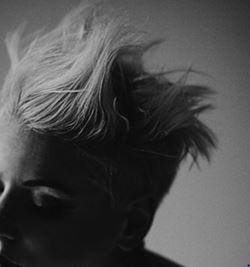 I had to fire my hairdresser.

It was not only uncomfortable, it involved change.  I don't do well with change.

Antonio had been my hairdresser for 10 years.  Though the salon was about a 25-minute drive from home and located on a very busy road, Antonio was fun to be around, he didn't charge much, and he did a good job.

My husband and I had just arrived in New Orleans for a vacation when I noticed (dare I say?) gray roots.  I was upset.  It had only been a few days after a salon visit.  The color did not cover well this time (reason #1).

I shouldn't have been surprised.  Many of my friends had given up coloring gray because nothing worked.  According to Liveabout.com, covering up gray hair is a special science.  Gray hair is difficult to color because it tends to be wiry and the dye doesn't soak in easily.   It can be resistant to total coverage, making it difficult to drive color into the hair shaft.

What's the big deal with a little gray?

Hair is everything.  It is a huge part of our appearance.  It frames our face.  It defines us.

Hair has been featured in the Bible, in Greek myths, and in a Broadway musical.  It is associated with youthfulness and beauty in women and virility and masculinity in men.  Hair can cement a signature style.  Think: Cleopatra, Angela Davis, Marie Antoinette, Marilyn Monroe, Princess Diana, Bo Derek.

While I don't have a signature style, I could have had one some twenty some years ago.  Back then, I wanted to have pink hair, except my daughter Abby and my husband were four-square against it.

This surprised me because as a young kid Abby liked exotic hairstyles.  Not on herself, but on me.  When we played beauty parlor, she slathered hand lotion in my hair and then pulled strands of it into spikes she called pickets.  Imagine every bit of my hair held in place by twenty colorful elastic bands.

During the time of pickets, I had begun to color my hair.  At first, it was semi-permanent color to add contrast and color.  Not long after, I made the decision to use permanent color to cover the gray that was beginning to show.

Keeping gray hair or covering it is a personal choice and cost plays a big role on that decision.  As reported by The Cut ,"Every year, American women spend billions ($30 billion on color, $22 billion on cut, $7 billion on product) trying to get it just so."

Since I spent a great deal of money on my hair, I wanted it to look good.  When my husband and I returned home a week later from New Orleans, I gave Antonio a call to see if there was another product that would cover the gray.  He suggested that we try multiple products over the following weeks, but he said that there was no guarantee they would work.

Faced with the uncertainty that my roots still might show no matter what we tried, I considered finding another salon.  It was difficult because I wanted to remain loyal to Antonio.

I wasn't sure what to do until tragedy hit.  My sister-in-law had been diagnosed with a deadly brain tumor.  Four months later she was gone.  Only 60-years-old.  Life is too short.  Time is precious (reason #2).  I thought about the three hours it took to get my hair done—time that could be spent writing as well as doing other things I loved.  So, I began to search more seriously for a salon closer to home.

The Washington Post reports "finding the right hairstylist is nearly as difficult as finding the right mate. The stylist-client relationship involves trust, communication and loyalty and, just like dating, finding a stylist can be awkward and expensive—repairing a botched cut or a dye mishap can cost you hundreds of dollars, not to mention your dignity   The easiest way is to ask people with a style you like where they go."

After asking some friends and goggling salons, I tried a place closer to home.  I wasn't sure how it would work out.  With change comes uncertainty.  But things worked out well.  Going to the new salon makes me happy.  The appointment time is much shorter and the color covers gray.  What was difficult was telling Antonio.  When I finally made the call, it sounded like a bad break-up:

I left our relationship hanging in the air because I'm not good at breakups.  Several days later, I asked the receptionist to cancel all of my appointments with Antonio (yeah, it was cowardly).


Breaking from the past and embracing change is not easy.  Making a new start takes courage.  It takes risks.  Having doubts are part of the process.  But you never know what will happen until you try.  That's the mystery and the beauty of change.

Thanks for sharing the blog, seems to be interesting and informative too.
marketing write for us