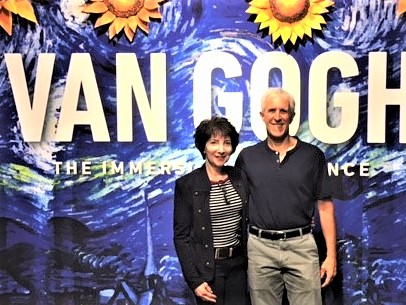 I'm not a fan of surprises.

But recently I attended two events with my husband where I let myself be open to surprise.  I didn't read any reviews or research the shows to find out what to expect.  All I knew was at the van Gogh venue we'd be seeing Vincent's art, and at a historic home in Lexington, we'd be watching a play written by Chekov.

I'm a big fan of van Gogh.  I've read about him extensively, and I've gone to many museums to see his famous works.  My husband and I even had the opportunity to go to the van Gogh museum in Amsterdam (one of THE best art museums I've ever visited).  But here, in Cincinnati, there was uncertainty and excitement—we didn't know what paintings would be displayed and how they would be presented. 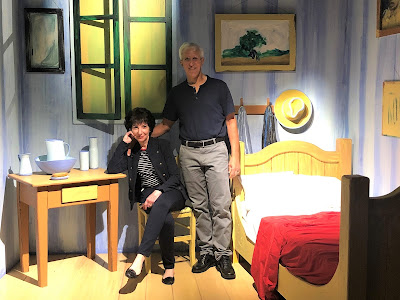 At the entrance, we found a bust of van Gogh suspended in midair and on it, paintings were projected onto the face.  A little further down the hall, we discovered a wall covered with 3-dimensional golden sunflowers, where people posed to have their pictures taken.  Of course, we obliged.

Onward into the next hall, we viewed his most famous works: canvases of sunflowers and self-portraits.  Besides each one, little cards gave details about the paintings.

We shuffled into the adjourning room where the The Bedroom had been recreated.  No doubt, Vincent's spirit welcomed me to sit and rest my feet.  After we posed for pictures, we went into a stairwell where the steps and walls were painted in deep blue with yellow-glowing stars.  It was as if we were floating in the skies of the painting The Starry Night.

And then, we opened a curtain and stepped into a large room where scenes of his paintings were projected on all four walls.  But it didn't feel like we were inside a room.  It felt as if we were outside in a field at dusk with people sitting on lawn chairs and benches.  We dropped to the floor on a blanket and watched the images flow from the left wall to the front wall and around to right side and then to the back of us.  We were awash in the art of Van Gogh.  And as the music played and Vincent's quotes were read, I felt his highs and lows, a full range of emotions of a man who suffered for his art.

Like the Van Gogh Immersive, I had no clue what to expect from this play.

On a hot summer night my husband and I were greeted just outside the parking lot and escorted to the garden of a historic house in downtown Lexington.  Twenty chairs had been arranged alongside a flower bed.  We were invited to take a seat.  And then, the action began and we were part of the set!

Two cast members were seated at a table while another actor slept on a blanket on the grass.  Casual conversations began and slowly the plot was revealed.  As other actors entered the garden, the drama unfolded.  With every line of dialogue, we were getting to know these characters, their relationships, their troubles.  After the last line of the act was recited, an usher led us into the house and upstairs through a darkened passage. 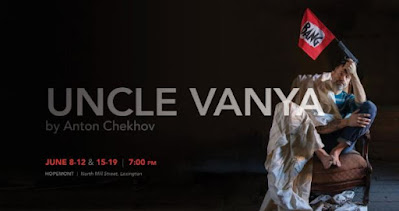 Upon reaching a bedroom, we heard thunder rumbling as we were seated against a back wall.  A storm was brewing (figuratively and literally).  Actors burst into the room venting and sobbing.  The tension had increased and each character grew more miserable—many of them having fallen in love with someone who didn't love them.
When the act concluded, we were ushered back to the garden for the intermission and refreshments.  Afterward, we were escorted to a dining room.  We sat against a back wall watching as the tension came to a climax.  So much emotion and unease.  So much gloom and doom.  Just when we hoped things would get better, a character waved a gun, and we were abruptly led to a parlor for the last act.  I wanted the play to end on a happy note without a murder.  At least one of my wishes came true.  There was no violence.  But as the final lines were recited, we found that the characters had changed.  Their lives would be harder and probably sadder, and yet somehow a gleam of hope prevailed.
Upon reflecting on the play, I found that though the audience was a feature of each scene, we didn't participate.  We were merely dropped into the middle of a Russian manor.  But we did have a role—to observe the actors up close.  And being part of the set, I got to know the wants, loves, goals, missteps, and misfortunes of each character.

What one gains in an immersive art or theatre production is personal.  There really isn't a middle of the road feeling.  You either like it or not.  For me, the experiences will likely stay with me for a long time because I allowed myself to welcome something new, something original, something daring.  By being surprised and not knowing anything in advance, I experienced the art and the drama more deeply.  I became aware of the energy and creativity needed to pull off these shows, and I left feeling humbled by talent.