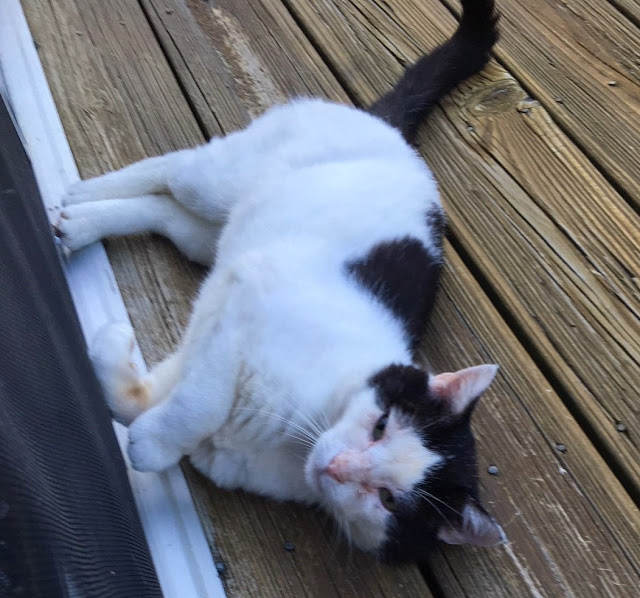 BANISHING FEAR WITH LOVE
Putty was injured and I didn't know how to help him.

Nine years ago, this gravelly-voiced, black and white stray showed up on our deck begging for food.  My husband and I have been feeding him ever since.

Over the years, I've noticed minor cuts on Putty, nothing serious.  But one day not long ago, I noticed Putty was limping.  At first, I thought he had broken his leg.  There wasn't an apparent wound, yet he could only walk on three paws.  Putty squinted.  His wounded leg quivered.  He showed little interest in food.  I could sense his pain.  Being Sunday, I had to wait a day to call my vet.  But when Monday rolled around, the veterinarian was unable to make a house call until Friday.  I didn't think Putty could wait that long.

I called my neighbor Sherry who also feeds Putty.  She gave me the name of her vet because he makes house calls.  But when I phoned him, I got an answering machine.  Dr. MacDonald wouldn't be back in town until Wednesday.  I left him a message about Putty's condition.  My poor kitty appeared to be suffering, he was barely eating, and he would have to wait two more days for help. 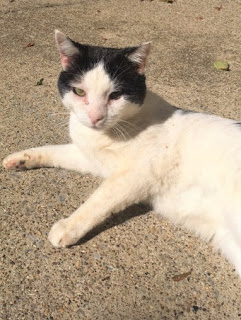 On Wednesday, I noticed a smear of blood on Putty's hip.  As he limped on our patio, I finally saw the cause of his injury.  There was bloody abscess about the size of a half dollar on his hock.  I was sick with worry.  This did not look good.  Luckily, Dr. M. returned my call.  He could come out to our house, under one condition:  I'd have to trap Putty.

This was easier said than done.

But the vet needed Putty in an enclosed area so he wouldn't run off.  I told him I'd try to trap him.  I loved Putty and was determined to get him the medical attention he needed.

My husband and I backed our cars out the garage.  I moved bins and tubs around on shelves and blocked places where a cat could hide.  When every area of the garage looked safe, I pulled out a can of tuna.  Putty was in the backyard.  I wondered if I could tempt him with the tuna and get him to hobble over to the driveway and into the garage.  I worried how to keep him contained in the garage once he was inside.  Luckily, he did manage to follow me.  I got him as far away from the garage door as possible so he wouldn't make a run for it and motioned to my husband now, quick, close the door.

And we had him safe inside.  Dr. M. arrived in five minutes.  Finally, Putty was going to get some attention.  But when I opened basement door to the garage, Putty was nowhere in sight.  Sh*t!  I walked the perimeter of the garage.  No Putty.  I was so embarrassed.  Where was that cat?  Had he squeezed out of the corner by the garage door through an impossibly narrow opening?  I looked again on the verge of panic.  But there he was, trying to hide against the back wall of a shelf.  After coaxing him down, he moved to another corner of the garage, where the vet could work his magic.

I was concerned Putty would not be a cooperative patient.  But Dr. M. wrapped Putty in a blanket and then in a calm voice, he told me I'd be his assistant.  My job would be to hold Putty while he prepared the injections.  I slipped on garden gloves to protect my hands, but Putty hissed at me.  The vet said the gloves were probably scaring him, so I had to help bare-handed.

Putty's razor-sharp claws had scratched me more than once and now that he was scared, he was likely to bite.  I was terrified.  Mortified.  I really, really did not want to do this.  And there wasn't much time.  Who knew how long Putty would stay put?  I was a nervous wreck.  But I had to pull myself together.  So rather than stressing, I focused on how much I loved Putty and centered my attention on helping the vet.

Dr. M. showed me how to grab onto the scuff and wiggle it to distract him as he inserted the needle.  Believe you me, I wiggled the hell out of the scruff.  After the antibiotic and the pain shots were given, he removed the blanket.  Putty was free to go.  With that, I opened the garage door and he limped away.

Before Dr. M. left, he handed me an oral antibiotic that I would need to give Putty twice a day.  Good luck, I'm thinking.  If Putty was traumatized, he may never come back.  I could have scared him off for good.  My sweet little stray.

But that night, Putty returned and he wolfed down all of his food with the antibiotic in it.  I was so relieved to see him come back the next day and get more antibiotic into his system.

Surprisingly, within a day after the injections and a day's worth of oral antibiotics, Putty looked better.  His eyes were brighter.  He could put weight on all of his paws.

Putty still has a long way to go, but he'll get the care he needs and all of the food he craves.  Looking back, I was surprised how frightened I had been.  I was scared of being hurt and afraid of letting Putty down.  But through this experience, I found determination can conquer fear.  And anything is possible with love.